This article reveals the relationship between the representations of migrants’ social experiences in theatrical productions and the institutional positions of Berlin and Moscow theaters that address migration issues. The study was based on in-depth interviews with participants of the projects Winterreise, The Situation (Maxim Gorki Theatre), and Come as You Are (Dock 11) in Berlin, and Akyn-opera (Teatr.doc) and Svan (Meyerhold Center) in Moscow. The fact that the attention of German and Russian societies is focused on different types of migration—forced in the first case and labor in the second—certainly affects artistic representations. However, in both contexts I consider the performances in which migrant artists with professional backgrounds took part. The main thesis of the article is that if in Germany productions with migrants are largely predetermined by the fact that theaters perform the role of a political forum, in Russia we observe the opposite trend. The case of Akyn-opera revealed that the theater’s attempt to generate civic initiatives and involve migrants in them could not succeed for several reasons. Acknowledging this, I deliberately refrain from assessing the analyzed performances in terms of their “success.” The interviews that I conducted show that the high degree of politicization of German theaters is not a self-evident value for artists with migrant background (with all due respect to the promigrant position of the German theater community). As for Russia, despite the fact that Akyn-opera did not become a “bridge” between conscious townspeople and migrant communities, this project had unexpected consequences for its participants. Those who are professional artists, although they did not get the opportunity to return to their main vocation, raised their status in the diasporic community and established themselves as artists for a certain segment of the Russian public. In addition, Akyn-opera has become an unprecedented testimony to migrant workers’ experiences of living in Moscow. 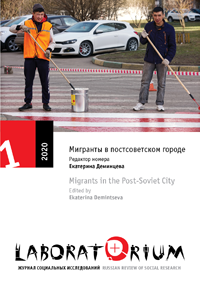