Throughout Western Europe live-in domestic workers such as cooks, housekeepers,and nannies were quite common until the second half of the twentieth century. The postwar period of socioeconomic rebuilding brought social welfare and publicly funded care facilities that effectively reduced the demand for live-in domestic workers,and until quite recently only the wealthy upper social strata could (and would) still employ full-time carers. Yet, recent trends show that the need for private carework is again increasing across Europe, caused especially by the growing demand forelder care. Research has already confirmed the return of the live-in domestic carework model in some European countries, coupled with the dismantling of the welfare state, as well as closure of state-funded childcare facilities and other forms of public care infrastructure. 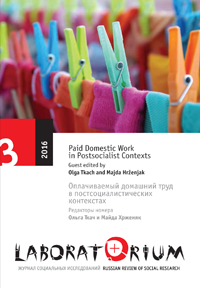