This issue of Laboratorium features a special section dedicated to street art or, more broadly, to vernacular images in the contemporary urban environment. The idea first occurred to the editors during their collaboration in the “Street Art in Contemporary Society” research group at the National Research University–Higher School of Economics, Moscow, in 2013. It took shape at a conference organized by the International Visual Sociology Association, “The Public Image” (held at Goldsmiths, University of London, July 8–9, 2013), where Natalia Samutina and Oksana Zaporozhets chaired a panel “Street Art, the City, and the Public: Changing the Urban Vision.” Presenters from eight countries tried to conceptualize the place of street art in the city, considering it as a relatively new and blossoming urban phenomenon. You will find three of these articles in this issue’s special section; in addition, we publish three reviews of recent books on urban imagery in the reviews section. 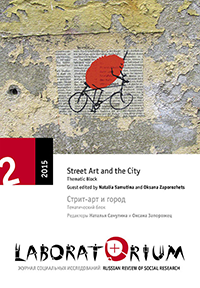