In 2012, a major exhibition entitled Dictionary of the Caucasus: The Land and the People took place at the Tsaritsyno Museum. It brought together exhibits from 17 state cultural institutions and modern art workshops of Moscow, St. Petersburg, and Makhachkala. An illustrated catalog was published, featuring 26 authors—foreign and Russian anthropologists, archaeologists, philologists, and art critics. In this article, the museum’s curator reflects on the linkages between ambitious scientific concepts and the reality of exhibition practice in the space of a modern Russian museum. The article is based on the experience of a single exhibition. It examines the development of a conceptual exhibition on a quite traditional empirical basis. The author addresses some key problems of conceptualism, an art movement that has already become part of the history of the twentieth century. It is connected, associatively and programmatically, to ethnographic conceptualism—a new scientific discourse. The article poses the following questions: What are the mechanisms of translation of the author’s intention (concept) into the real exhibition space of an interdisciplinary project? What are the practices of imagination we would like to draw the spectator’s attention to? And, most importantly, what are the relations between this result and the approaches of ethnographic conceptualism, promoted by the authors of this volume? In Russian, extended summary in English. 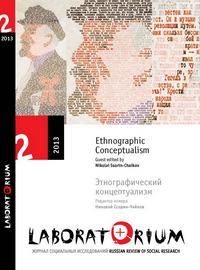