The model of French-style journalism has historically been built around two figures: that of the writer and that of the politician. This model has also historically been built on male values. I will try to show in this article the effects of feminization on the very definition of journalism. To do so, I have chosen to observe three different moments in the history of journalism that are important steps in the process of journalistic professionalization. I have chosen to ”reread” three key moments in journalistic history—theturn of the twentieth century, the liberation from German occupation in 1944, and the end of the 1970s—in the light of editorial projects carried out by women and seeking to reconcile feminist or women’s interests and professional excellence. These three projects—La Fronde in 1897, Elle in 1945, F Magazine and Histoires d’Elles in the late 1970s—show how new entrants into a professional group succeed in imposing values in line with their trajectories and dispositions. 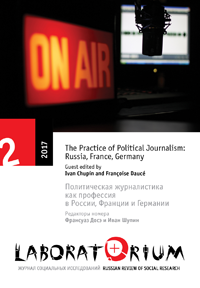 How to Cite
[1]
Lévêque, S. 2017. Feminization in the Professionalization of French Journalism: From La Fronde to F Magazine, or How Journalism Became a “Woman’s Job”. Laboratorium: Russian Review of Social Research. 9, 2 (Oct. 2017), 20-38.
Issue
Vol. 9 No. 2 (2017): The Practice of Political Journalism: Comparing Russia, France, and Germany
Section
Articles