This volume is a thorough presentation of sociologist Anna Temkina’s comparative study of paradigms of women’s sexuality in post-Soviet Tajikistan, Armenia, and Russia. In three cities (Khujand, Yerevan, and Saint Petersburg), Temkina and colleagues carried out in-depth interviews to ask subjects, both female and male, about their experiences of sexuality and their views on sexuality. Her interest is in the spectrum of control, or freedom, of women’s sexuality, drawing on Giddens, Kon, and Connell to theorize the centrality of women’s sexuality to gender relations. The research in three post-Soviet states explores changes in paradigms of sexuality from the later Soviet decades through the post-Soviet years. Comparison among cultures allows Temkina to examine tendencies toward what she calls “traditionalization,” “modernization,” and “liberalization.” 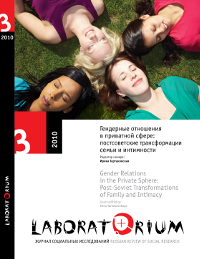