A true immersion into the Gulag world and into Soviet reality in general, Camp Guard: Tattoos and Drawings from the Gulag is a unique source not only for historians but for sociologists and art historians as well. Composed in 1989 by Dantsig Baldaev (1925–2005), an employee of the Soviet Interior Ministry, it is a scrapbook that comprises two parts, both of which convey a common reflection on violence. The first part is a classification of some of the prisoners’ tattoos; the second part is a look at camp life through drawings made by Baldaev during the second half of the twentieth century, based on his own observations as well as on collected accounts. Centered on the time of Joseph Stalin but encompassing the whole Soviet era up until the war in Afghanistan, these 74 pages offer a remarkable graphical representation of daily life in the Gulag, including its most violent aspects (living and working conditions, torture, humiliations, executions, corpse management). 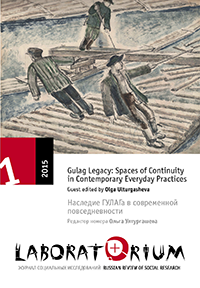